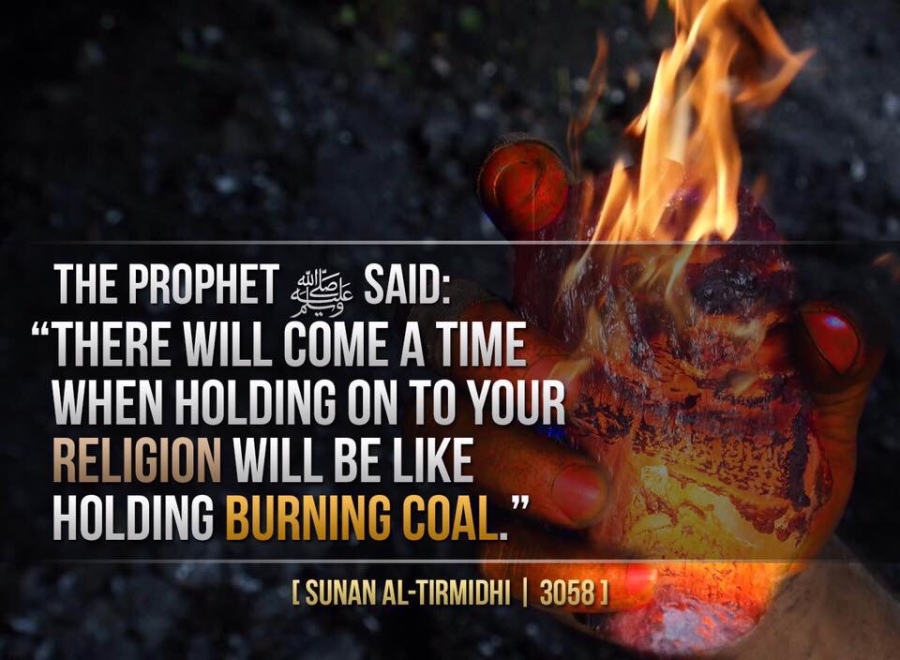 To all those who feel or might have already tagged me with a name or put me in a group which u feel from ur limited knowledge, especially with that which is inbred in u through some hate mongers, who do not ponder and seek by themselves for truth but go by hearsay, that I am so and so.

So let me clear myself and be quite explicit on it that we are living in an age where following the way of our Rasool (صلى الله عليه وسلم) is considered wrong or difficult and following the way of the modern world with all its filth in it, is the right way and that is the only path one should seek. And those who seek a path other than this modern filthy lifestyle are considered a social outcast or taboo. That is an utter shame that we consider the wrong way, the right path!

I remembered a Hadith of our prophet and that is so perfect for this situation, so have attached the same for your reference. Sadly that is the age we are living where holding on to our religion is like holding on to a hot burning coal. We are living in an age where a person who obeys Allah and follows His Rasool (صلى الله عليه وسلم) are tagged with different names rather than thinking he or she is just a Muslim – slave of Allah!

Anyways I don’t expect much change in you by reading the Hadith coz you are either blinded by hatred or envy and they are the disease of a dirty heart. In fact these two are the fuel of all evils. And it will go when you change and indeed only when you change, as me or anyone else cannot heal that. So do work on it if you have that in you.

A reminder for all of us:

(Interpreted in English as)

O believers! Let no men laugh at other men who may perhaps be better than themselves; and let no woman laugh at another woman, who may perhaps be better than herself. Do not defame through sarcastic remarks about one another, nor call one another by offensive nicknames. It is an evil thing to be called by a bad name after being a believer, and those who do not repent are the ones who are the wrongdoers.

(Interpreted in English as)

O believers! Avoid immoderate suspicion, for in some cases suspicion is a sin. Do not spy on one another, nor backbite one another (to say something about another behind ones back that if one hears it, dislikes it). Would any of you like to eat the flesh of his dead brother? Surely you would abhor it. Fear Allah; for Allah is the Accepter of repentance, Merciful.

May Allah guide us all for a better understanding of the Deen and help us avoid the sins like calling each other nicknames, making fun of others especially who work hard to please Allah and last but not the least let us stop dividing ourselves by making groups among each other.

One thought on “I am just a Muslim!”