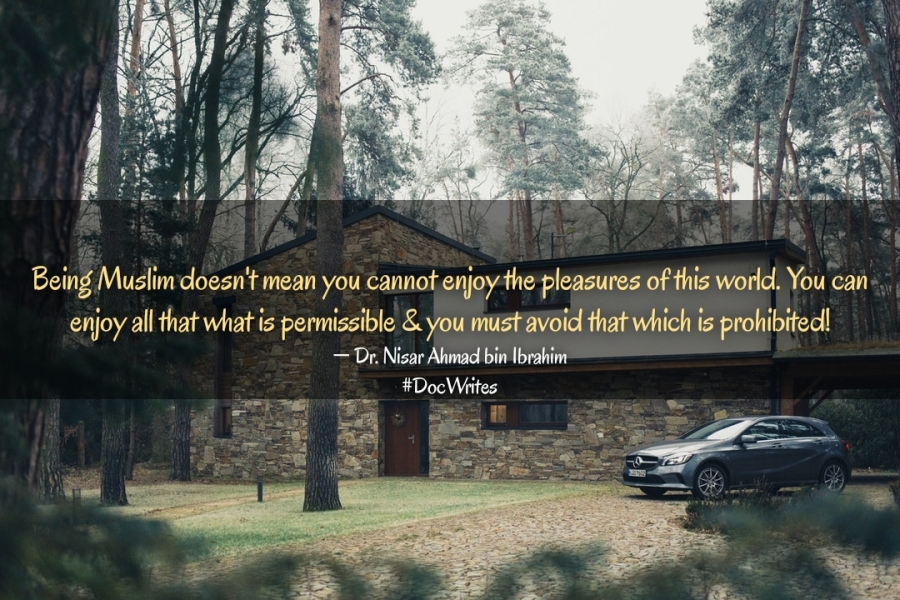 Many a times we happen to see that some of the Muslim brothers target those who try to follow Islam correctly by telling that if they want to follow Islam correctly then they should sacrifice all the riches of life and lead a nomadic life. They make a point that this life is not for a practicing Muslim and he or she has no right to eat good food or wear good clothes or live in a good house or own a good car. I feel so pity for their shallow thinking and their remote knowledge of Islam and also their capability to understand Islam.

We need to understand that as long as what we enjoy is permissible and Allah has bestowed us with wealth to do so and is not extravagant then we can do so.

So now what is extravagance? Coz many have a different idea regarding the same. Extravagance means overdoing or overstepping the limits what Allah has bestowed to each one of us. For example if a person is millionaire and he can afford a lavish villa and servants then he can do so but with an intention of taking care of his family and fulfilling his needs and not with an intention to boast or feel superior than the rest. As it’s all about intention for a believer, each action of ours is governed by intention and those actions will be rewarded accordingly.

Now if a moderately earning person does the same of building a lavish house etc when he/ she actually cannot afford and ventures into interest-based loans then he/she falls into the category of extravagance. And as per the Book of Allah, Allah hates extravagance. Similarly if a poor tries to do the same then he is only being foolish!

So once we understand that whatever we do is governed by the rulings of Allah and is not extravagant then we can enjoy all that what is available in this world. After all this world was created for us to enjoy in a way that it has to be enjoyed, so that our focus doesn’t shift or we don’t get deviated from the straight path and lose our destination i.e. Jannah.

And also we must not forget that if you stack up wealth and do not use it at all, then that wealth would not yield you any benefit after you die coz then that wealth will belong to its heirs. So it’s better that we use our wealth for righteous deeds so it can be as an ongoing charity even after our death and also spend on our family as that is also an act of charity and will yield you reward from your Maker!

May Allah help us to understand the exact meaning of this life and also help us realize that the things what He has created in this world is for us to use as means to complete this journey. This is all but to see which among us is the righteous and deserves the paradise.

My evidence: Interpreted in English as,

“…eat of its fruit when it bears fruit, and pay the due of it on the day of its reaping, and do not act extravagantly; surely He does not love the extravagant.” (Quran 6:141)

The Prophet (peace and blessings of Allah be upon him) said: “Actions are but by intention, and every man will have but that which he intended.” (Bukhaari and Muslim)

Sa’d ibn Abi Waqqaas (رضي الله عنه) said: The Messenger of Allah (peace and blessings of Allah be upon him) said: “There are four things that are essential for happiness: a righteous wife, a spacious home, a good neighbour and a sound means of transportation. And there are four things that make one miserable: a bad neighbour, a bad wife, a small house and a bad means of transportation.” (Ibn Hibban & Musnad Ahmad)

Nafi’ reported: The Messenger of Allah, peace and blessings be upon him, said, “It is part of a person’s happiness to have a righteous neighbor, a comfortable mount, and a spacious dwelling.” (Musnad Ahmad)