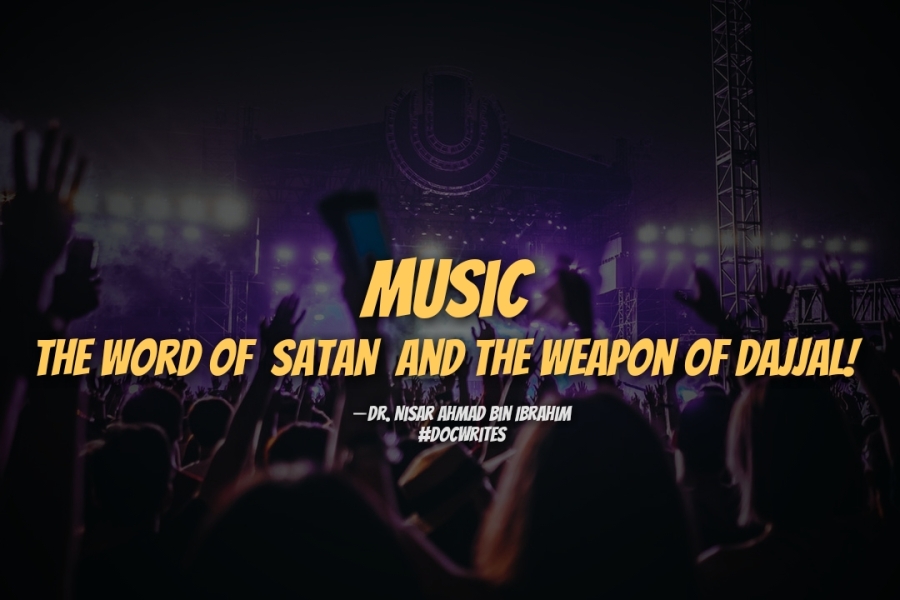 It’s unfortunate that we are living in an age where Muslims have adopted haram things as halal and so have proceeded to make music, movies and teleserials halal and enjoy it day in and day out!

It’s a means of amusement and simply a waste of time. Yet it has been propagated among the people so wisely that people have adopted wholeheartedly the plan of the antichrist.

We have become scapegoats & yet we are not aware.

We have lost Islam & yet we are not aware.

May Allah protect us from such deception and misguidance.

May Allah protect us from this addiction which has corrupted our souls such that we cannot live without it!

Do you purchase or like music over the Quran? Have you become such that you cannot live without music at your home or in your car or while you are on the go?

Then the following verse is a reminder for those whom a reminder would benefit!

Verse from the Quran & a Hadith indicating the prohibition of Music

Understand the science behind the way music is affecting us & has incapacitated us.

Media is being utilised only to brainwash us to accept their ideology and cult which is being slowly fed to us without any hint. As a result, we are easily getting affected due to the amount of exposure that we are getting on a daily basis.

Our emotions are being controlled & it has more so affected the young ones. Hence the young ones aren’t able to control their rage and have found to be short of moral values. They are slowly getting addicted to drugs, alcohol, immoral behaviour & sexual perversions.

Now that is what the media has gone on to successfully achieve by using the mask as a channel to facilitate and help people by creating awareness & producing entertainment.

Remember they cannot deceive without portraying their pros & viciously hiding their cons. And deception is a strong weapon of the Dajjal – The Antichrist!

Now the choice is yours whether you & your children want to be controlled by their ideology and their cult or you want to protect yourselves & your future generations from this deception of the Antichrist.

The Science behind Music

Now this is how the media & music industry works in this world. It is used to influence and deceive people from the straight path.

It’s been used to reduce your moral values and make you forget the hereafter and subconsciously worship lucifer (Satan).

Both music and movies are the weapons of Dajjal in order to deceive humans and make them deluded by getting them addicted and brainwashing them to follow a cult that worships the Satan!

The amount of deception is such in the society today that the message of the Satan has been delivered without even getting any hint of it. Thus people feel they are cool when they make symbols of Satan without their knowledge with their own fingers, be it while taking selfie or in a group or in an event!

May Allah make us realise this and help us de-addict ourselves from this sickness and help us walk on the straight path.

Do you still love your music?

Do you still sway your body when you hear the beats of music?

Do you still want to continue enjoying the audio pornography?

Do you still want to subconsciously worship the Satan?

Do you still want to live in the world of deception submitting to the Dajjal?

And you need to decide for yourselves and your children!

May Allah protect us and our kids from such a fitnah which has become a norm in our lives!

A slave of Allah who is a doctor by profession and a writer by passion in order to call people towards the Haq (The Truth). Especially, after having recognized and understanding the truth of this life. My goal is to walk on the straight path and help others who have the same goal!