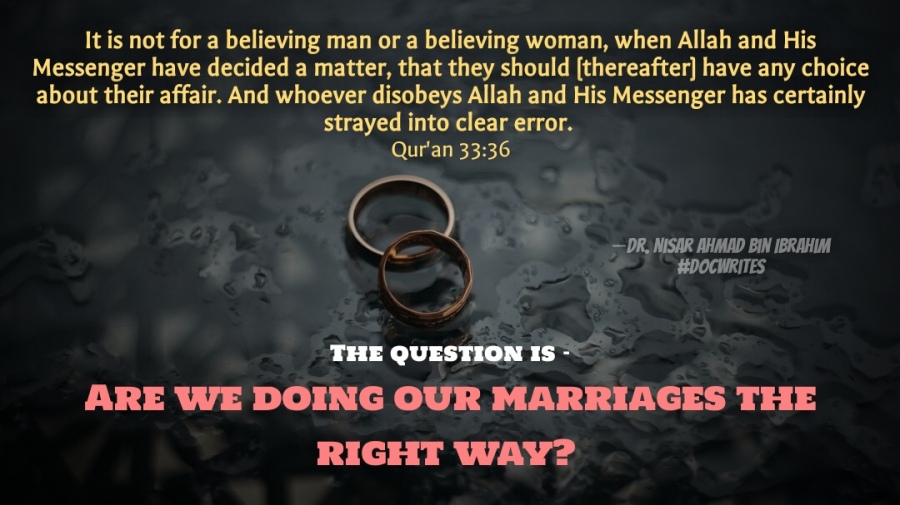 Unfortunately people do not want to follow the right way. They want to overrule the laws that has been set by Allah and His messenger (صلى الله عليه وسلم) and instead follow the laws and customs set by people & their society. Thus, they have made it mandatory for a girl & her parents to spend money for her marriage, when it isn’t!

I ask them where in the Quran and the Hadith has it been stated that the girl and her family must spend for their marriages?

❝ It’s the boy who has to pay the mahr (dowry), seek permission from the guardian and acceptance from the girl.❞

Today we see people struggling to get their daughters married just because of such cultural practices which the so-called Muslims have adopted and have made themselves submissive to these laws. They do it either out of fear of what people will say or in fear of losing their pride & prestige. It’s actually the wrong practices that the society has adopted which has made a burden on the families that are poor and are not able to afford.

Know that the nikah is half of Deen. So do not neglect this aspect of Deen by adopting the culture which goes against the law of Allah.

It’s one thing that you have the capacity to gift your daughter out of sheer love and totally another thing when you cannot afford, yet you want to do it for the mere fear of “what people will say?”

This is actually done to feed their egos & to take pride about their false prestige by doing a wedding in a flamboyant way, only to hear people talking good about their weddings.

In order to achieve that, people venture into Riba (interest based loans) & also think that it’s the duty of relatives and friends to help for the same and to be part of such culture and participate in their pride, arrogance and haughtiness. Incase you cannot help them, then that becomes a reason for spoiling relationships. Thus, falling into bigger sins of breaking kinship.

It’s also not hidden, that these weddings are not devoid of music, free mixing and wanton display of beauty. It’s unfortunate to see the Muslims be it the bride & other women are objectified due to their forsaking of modesty and are actually happy to garner compliments and gaze from non mahrams & strangers.

Thus, all these actions waters down the mere act of ibadah, where a nikah is supposed to be half of Deen to please Allah instead they have pleased the Satan.

Remember there is no barakah in doing that which displeases our Maker just to please yourselves & your people!

May Allah guide us to see the haq from the baatil and to be steadfast to seek the pleasure of Allah!